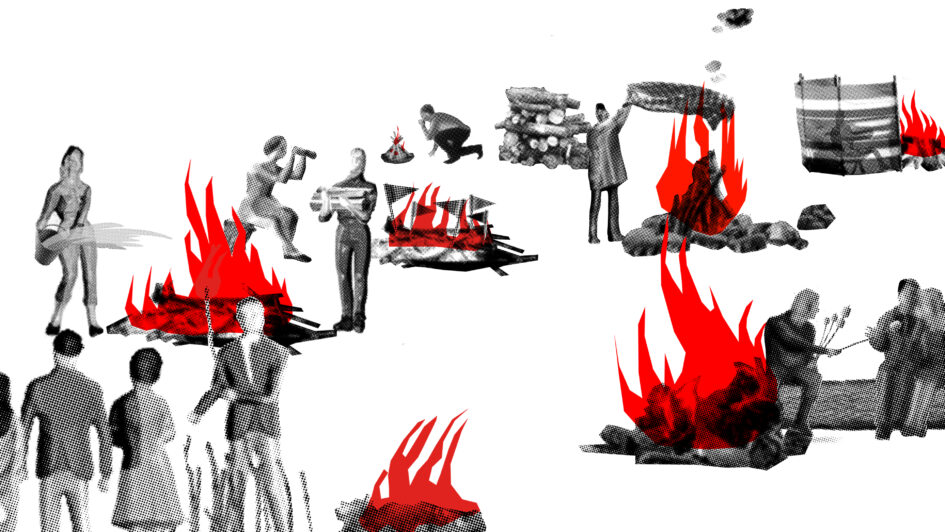 In our Librecast project, funded by the European Cultural Foundation, we showcase a series of Pan-European case studies about sovereign media distribution, away from big tech. We highlight these examples and try and learn from them, as we desperately need more sovereignty in our media systems to ensure a well-functioning democratic media landscape. We also asked a talented illustrator to help us explain these initiatives visually. This time: Bonfire, an interesting transnational initiative that presents flexible federated tools for online communities. Let’s dive in.

Bonfire, the modular ecosystem for federated networks has recently released its beta. Many of the features incorporated in the beta can be recognized from other social apps, such as navigating timelines and profiles, following other users and creating posts, but it does more than what has already been done. The project aims to develop tools for conviviality, by which is meant that it allows for communities to have total control over the instruments and functionalities they deploy for building their own community without any market forces profiteering off of data that is produced in the process. We had a conversation with Bonfire founders Mayel de Borniol and Ivan Minutillo about how the project came about.

Mayel de Borniol and Ivan Minutillo, the founders of Bonfire, have previously worked together on various projects such as MoodleNet, an open source platform for educators. Ivan: ‘During our time working on MoodleNet, we built the foundation of what was to be Bonfire. We were looking to develop a rather modular and flexible framework, so that building other stuff on top of it would be easier and time efficient. We therefore mainly focused on flexibility and building different models so  the whole framework can basically be a configuration of how the models play together.’

The idea behind Bonfire as a social network is that it puts the community above everything else. The software provided by the Bonfire team does not spy on its users nor does it include any type of advertisement. Furthermore, the Bonfire functionalities allow communities to design the online space they use in a way that is unique to their own wants and needs.

Mayel: ‘Technically, a lot more is possible compared to what most platforms allow for. We therefore decided to put all that is possible on the table and see how we can use it, how we can create an experience around it and let’s see how users use it in ways that we haven’t even thought about. We defined a set of technical rules of how this worked, and then it was figuring out how to create a user interface for that. We are still trying to improve that and simplify it. But the basic idea remains the same, which is that we want to put the textbook in the hands of the users.’

Ivan: ‘We found that overall, users really do not want to be more moderated but wish to be more empowered on what they can see, with more distributed governance on different levels. So rather than having the classic admin features that have super powers to do anything, or a couple of figures that have restricted roles, we created this flexibility that we thought would benefit communities in a way no other platform can.’

In the near future, Circles and Boundaries will be added to the Bonfire beta, which the Bonfire team describes as: ‘a way to privately group some of your contacts and then grant them permissions to interact with you and each piece of content you share at the most granular level.’ In conventional social media spaces, users tend to only be allowed to make simple decisions about who gets to see the content they share. By introducing Boundaries, Bonfire wants to give users more agency in the way they interact with others. Relationships are much more complex in the offline world, which makes it interesting to experiment with more flexible frameworks as it clearly has the potential to make online interactions safer and more enjoyable for those using the platform.

Ivan: ‘Communities and individuals get more ownership over how they relate to others. So for example in bonfire, we are now implementing a variety of roles so that an admin can give permission for example, to a certain user to see all the flagged activities. So when the user flags an activity, the admin can give someone the role to see all the flagged activities.’

In real life you have best friends, acquaintances and people you don’t know that well but somehow really trust.

But on most social platforms you can only assign people roles with specific permissions attached to them, like follower, admin or friend. And only a few of these ‘job titles’ are available.

Bonfire now lets you choose between a long and growing list of permissions to assign permissions to users. The possibilities someone has on a platform are no longer defined and limited by a role, but can vary endlessly. The seven permissions to be implemented are represented in the images below.

Bonfire’s code is publicly available for others to be forked or used in any other way. Mayel: ‘Our goal was to create something modular and reusable with a lot of flexibility and control. In the hands of other teams, other developers and other projects but also in the hands of other users directly. What we hope to achieve with Bonfire is other people building completely different apps using what we have created. Not even having to interact with us if they don’t want to. Of course we will always be there to help but you know if people take it and do things with it. That would be really awesome. And that is started to happen a little bit.’

Next to inviting other developers to start exploring the networks’ beta, the Bonfire team is also working on a new extension by itself. The extension will involve a rather unique approach to combating one of social media’s biggest problems, misinformation. It will be powered by the users’ assessment of content which shall be used to train experimental AI. In this way, scores can be attached to various types of content not based around the values of a specific platform or the judgment of hired content regulators, but the values of a specific community.

Bonfire is looking for people to play around with their newly released Beta to help with bugs and possible improvements. The project is also searching those who are willing to help with translations in more languages, such as Catalan and German. For those interested in being kept in the loop about Bonfire’s progress, it is also possible to subscribe to the Bonfire newsletter.

All images in our Librecast project are created by the talented Julia Veldman C.