Thinking beyond privacy: the risks of big tech’s entry into public sectors 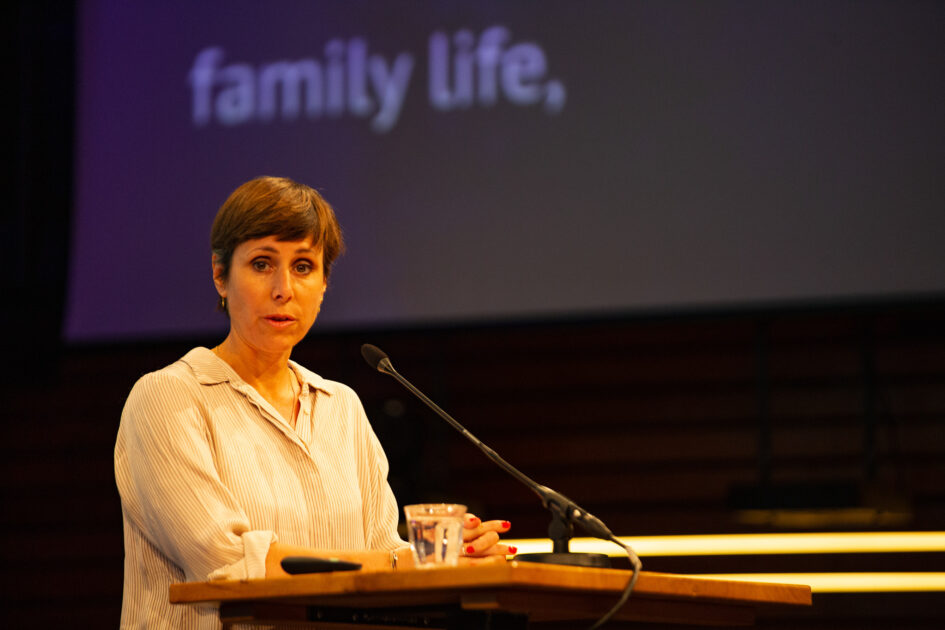 How do big tech companies shape public sectors after their own interests? On day 1 of the Public Spaces conference, professor Tamar Sharon presented the Sphere Transgression Watch: a tool that visualizes the presence of big tech across public domains. In her talk and a follow-up interview, Sharon argues for a critical view on big tech companies that looks beyond their impact on individual users.

In the midst of the Covid-19 pandemic, Apple and Google presented a contact tracing API tool that allowed governments to monitor the spread of the virus. The introduction of the tool was not only surprising because of the unlikely collaboration between the two companies, but also because of the tool’s privacy friendliness. But by giving up the access to data, Apple and Google gained something else: their widely adopted tool made them indispensable partners for the health sector in a time of crisis.

Tamar Sharon, professor of philosophy, digitalization and society at Radboud University, uses the example to demonstrate how big tech increases its societal power by entering new public domains such as health. In debates about the impact of big tech, Sharon advocates to not only discuss whether the privacy of users is safeguarded. Privacy, as in the case of Apple and Google’s API, might work as a smokescreen that obfuscates other reasons to be critical of the influence of big tech in domains across society.

To address how tech companies enter public domains such as health or education, Sharon introduces the idea of sphere transgressions. This concept is inspired by Michael Walzer’s theory of spheres of justice, who argues that inequalities within a sphere should not transgress to other spheres. Someone with a lot of political power, should not have access to better healthcare, for example. But it is precisely this illegitimate transferral of power that tech companies use to enter new domains of life.

Sharon names two risks of a company such as Google entering into the health sphere: they operate without domain expertise and they lack accountability for taking over public sector functions. The dependence on tech companies could lead to a different organization of a sector, so that a value such as efficiency might be prioritized over accessibility. ‘We need to ask: what is at stake in each sector, and for society as a whole? What can we loose if tech companies prioritize different norms and values?’

If we want to better understand sphere transgressions, we need to map the developments and investments of tech companies. With her research team at the iHub institute, Tamar Sharon developed a tool that allows everyone to do so: the Sphere Transgression Watch. The tool visualizes the presence of the major American and Chinese tech companies across different public domains. Users can zoom in on a specific sphere, or on the presence of one company across spheres. The timeline makes the transgressions into spheres visible across time. The tool is already available, but Sharon emphasizes that it is a living tool. ‘We welcome the input of everyone who can add information to the tool, so that it becomes more accurate and can function as a public archive.’

Sharon’s expertise lies with the “googlization” of health, a development that is clearly visible in the tool. But other spheres show similar transgressive developments. For a healthy democracy, transgression into the sphere of politics requires critical attention. Another example is education, a domain that has become strongly digitalized during the pandemic. Sharon critically follows these developments: ‘The Google classroom might have been useful in times of lockdown, but we have become too dependent.’ Once the company has established its position as educational partner, it is hard to get Google out of the classroom.

So, what can we do to prevent sphere transgressions from happening? Sharon argues for stricter regulations. ‘We need to lay down conditions to stop it from happening. Platforms can be helpful, but we need to stay in control over what their role is.’

During the conference, Tamar Sharon joined the panel discussion on the Digital Markets and Digital Services Acts, created by the European Commission to regulate tech companies. Although Sharon applauds the aims of the EU to regulate big tech, she argues that an overarching regulatory framework is still missing. ‘None of the Acts look at society as an aggregation of sectors and provider of fundamental public goods. We need to think beyond data and privacy, and beyond the needs of individuals.’ Sharon urges researchers, journalists and policymakers to have a debate about the risks of big tech for society as a whole. ‘Public spheres need protection in a democracy and that goes beyond individual rights.’

On a practical as well as regulatory level, Sharon calls for digitalization without marketization. The public initiatives presented during the PublicSpaces Conference might serve as inspiration. They offer a preliminary perspective on what public spheres, protected from private actors, might look like.

Everyone is invited to view and contribute to the Sphere Transgression Watch: https://www.sphere-transgression-watch.org/

Need to know more? Get in touch with Tamar Sharon via tamar.sharon [at] ru.nl