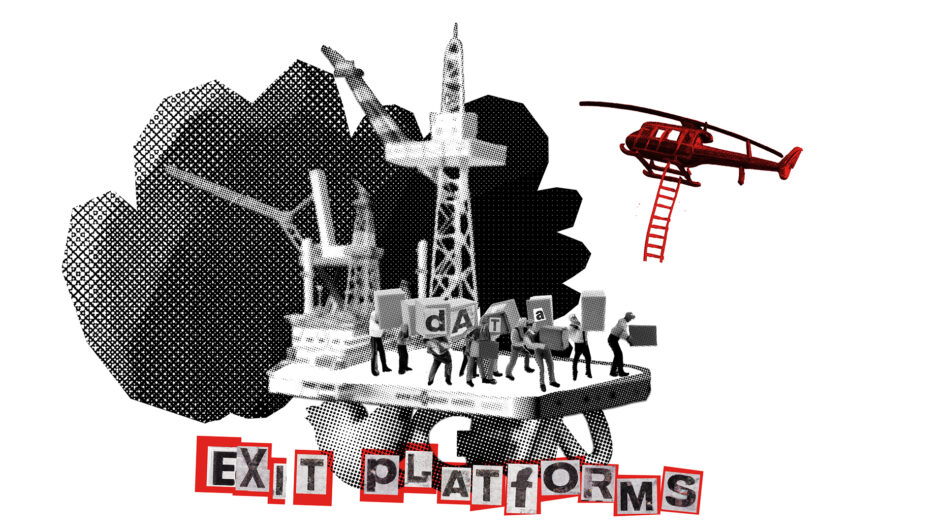 Many thanks to our talented illustrator Julia Veldman C. for creating the image above.

In our Librecast project, funded by the European Cultural Foundation, we showcase a series of Pan-European case studies about sovereign media distribution, away from big tech. We highlight these examples and try and learn from them, as we desperately need more sovereignty in our media systems to ensure a well-functioning democratic media landscape. This time: Exit platforms, an iniative by PDU (the Project for Democratic Union thinktank), set up by Gerard Oosterwijk & Benjamin Zeeb. It brings together actors from different disciplines working on bettering EU digital policy for a more ethical world.

On the 11th and 12th of May 2022, Exit Platforms organized a hackathon in Brussels in order to come up with actionable solutions to shortcomings of current digital legislation in Europe and to map out a value-driven approach to go with it. In preparation of the event, Exit Platforms worked on building a network of digital actors from all over Europe, including civil society, business leaders, academics and policy makers. This series of online workshops, hosted on Citizenlab (open source) were part of this process & were centred around the different aspects surrounding digital space policy, such as stakeholders, advocacy, business models and infrastructure. These sessions laid the groundwork for concrete policy proposals that were formulated during the hackathon.

We’ll discuss these proposals, that function as a coherent policy roadmap going forward.

We often perceive technology as a neutral, unstoppable force and tend to forget there are humans at the core of all technology. As a result of this reductionist and deterministic way of thinking, we often forget the very real, human consequences of technology and innovation.

From the printing press to the introduction of television- all of these technologies have had foreseen and unforeseen human consequences. The consequences of today’s technologies however are particularly nefarious as a result of the rate at which they conglomerate and dominate all aspects of life, including (formerly) public spaces. Exit platforms therefore recognizes the need for a Humane Innovation Audit, a watchdog to critically examine the societal consequences of digital innovation.

In line with the above, technology is evolving rapidly and regulation has a difficult time keeping up. This is often referred to as the pacing problem. And specifically the ownership of data is more often than not an unaddressed policy issue. Exit Platforms emphasises the need for interoperability. Individuals should have sole agency over their personal data, which is why the data market should be fundamentally restructured. Data storage and governance should be separated from data processing in the same way the grid is separated from the energy producers in the electricity market.

One of the reasons the EU is struggling with creating a digital environment that is in line with European public values is that a lot of innovation in the online space does not originate from European soil, let alone public and/or democratically elected European organizations. It would be beneficial to put more effort into creating an innovative climate within the European Union. Exit Platform proposes to fund 50 accelerators in the EU, dedicated to humane tech innovation.

In recent history, the EU has not always been successful in recognising innovation of potentially breakthrough technologies, particularly those with high social impact. The 50 accelerators proposed by the Exit Platform initiative would help to shape and promote Europe’s digital transformation.

The importance of a local knowledge base

We shouldn’t just focus on large, national public and democratic bodies. We often forget the importance of local changes and its bottom-up impact on larger issues. Local governments however do not always have the know-how to anticipate for issues faced in the digital space. An EU-wide joint tender platform and community for local and regional governments could prove extremely beneficial, on which local governments can pitch their problem and/or share knowledge on how to combat these issues.

Finally, Exit Platforms addresses the needs to explore other types of business models. For example, new types of pro-consumer models have been emerging that allow consumers to also be investors in the platforms they use. These types of businesses have not yet emerged in the European market as the current legal framework within the European Union does not allow for them to exist as legal entities. The creation of an online cooperative legal entity would enable the Decentralized Autonomous Organisations (DAOs) to enter the market legally which could spur digital innovative models of cooperation within a European context.

Towards a different digital climate?

According to Gerard Oosterwijk, the outcome of the hackathon underlines the importance of advocacy for ethical technology policies. ‘When it comes to innovation, a lot more is possible in comparison to the technology we already have and use. However, if legal frameworks or monopoly statuses of large tech corporations prevent the growth of the European digital space, we have to make sure we convince policymakers to get behind the importance of giving equal opportunities for European digital spaces’. This can prove particularly difficult due to the extensive lobbying by big tech companies.

Quite a few voices are calling for ‘breaking up’ the Big Tech giants, but Oosterwijk argues we have to be more creative in finding a solution for what seems to be a long list of endemic problematic features of the tech industry. ‘I don’t think it is reasonable to assume that by breaking up big tech companies, the digital spaces will immediately become more pleasant. Instead, we should try to make sure Europe encourages creative alternatives by promoting and subsidizing innovation while also demanding interoperability for similar services so that consumers can have more agency over what services they decide to use.’

Exit Platforms shows us that it might be most valuable to consider the climate that is needed in order to realize the full potential for innovators of media distribution. And while legislative initiatives proposed by the European Commission surely are a big step forward in creating a level playing field for public value media, we still have a long way to go.